Forget Superman, Spidey and the whole cast of Avengers - being a kid in the Eighties, there was only one real hero, and he didn't come with any superpowers - he was just a hard-ass tough guy, who never smiled and NEVER took off his helmet... Judge, Jury and Executioner - known to us all as JUDGE DREDD. 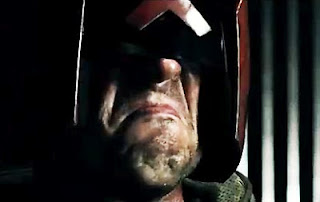 Of course he had his Lawmaster (high octane superbike), his Lawgiver (multi-calibre supergun), but what drove Judge Dredd and his storylines was that of a man bent on carrying out his mission; single-minded, stubborn and uncompromising, Dredd always got his man, and never let his personal life interfere with his duty (come to think of it, Dredd never really actually had a personal life in the first place). 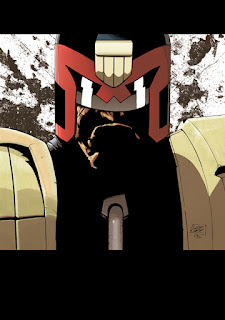 Gracing the pages of that hallowed comic strip, 2000AD, The Judge was the first of many memorable characters brought to life on that distinct, newspaper-like publication - Rogue Trooper, Strontium Dog, Nemesis, the ABC Warriors, and Halo Jones among them - all of whom I hope will one day get the big screen treatment.

Dredd has already been there with the Stallone-led 1995 effort - which had its highs and frequent lows. Although I thought that as a standalone actioner the movie was actually alright - but with so much mythos behind the character and a legion of fanboys expecting the treatment to remain true to the comic strip - every mistake and every element straying too far from the original was gunned down without reproach.

Of course the Numero Uno mistake being that Dredd was portrayed with his helmet off for most of the duration of the 1995 film. And as we all know - Dredd Does Not Take Off His Helmet!

Its taken 17 long years, but Dredd is finally back on the big screen - and this time, those in the know are saying that at least the style and atmosphere of the story are in keeping with the original treatment of Dredd. It's even been given a thumbs-up by the character's creator, John Wagner.

The ever-reliable Karl Urban takes on the eponymous lead role. And by the looks of the trailer, they might just have the fanboys raving!