I, like probably many of you out there, am totally guilty of taking my poor mother for granted. That's why I decided that I would surprise her (for a change) this year for her 63rd birthday by taking her to one of Singapore’s top aesthetic doctors to have a little bit of “work done”. After all, its about time she got a bit of TLC.

If you are a regular reader of this blog (which I hope you are), you will know that I have acne-prone, congested skin, which I can thank my father for, since all the women in his family have some issue or the other with their skin. My mother on the other hand, has lovely fair porcelain-type skin, which ironically, she has completely neglected, to the point where she doesn’t use sunscreen and often forgets to use the pricey serums and night creams I have presented to her over the past few years...

The reason I chose to go to Dr. Tam at EHA Clinic, is because after much research, I felt that he would be the best to do any injectables should he deem them necessary. I honestly feel that we should make the effort to do our research before embarking on having any procedures done, as the last thing we need is to have too much of something done, to the point where we look like caricatures of ourselves.

EHA Clinic is located on the 15th floor of Shaw Centre in Orchard and we were welcomed by his friendly staff who offered us freshly brewed Chrysanthemum tea before taking us in to meet Dr. Tam.

Dr. Tam was very sweet and gentle with my mother - which I totally appreciated as this was her first time at having anything aesthetic done (yes, she is one of those bizarre women who have never even had a facial). After examining my mother’s skin carefully he suggested that she consider some laser (q switch) and IPL for her pigmentation - due to unprotected sun exposure (and to sheer laziness I might add) and fillers to add some volume to her features.

Dr. Tam explained that this would be a work in progress, and he would not be pumping my mother’s face with fillers. Instead he would inject enough to smoothen her skin and lines and leave her looking like a more refreshed version of herself - not some over injected plasticine model. 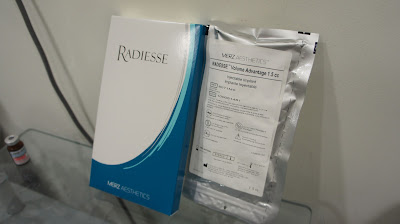 Dr. Tam recommended Radiesse Volumizing Filler, as not only would it add volume and lift to the areas that had sunken, it would also more importantly act as a sort of scaffold under the skin, providing structure while stimulating her own natural collagen to grow. The production of natural collagen would then continue for several months, which extends beyond the initial effect of Radiesse. Best of all, the natural results are clinically proven to last a year or more. To me, this made so much sense as it would be cost effective since the effects would last so much longer than a regular filler, but what I loved most was the fact that it triggered the growth of collagen. 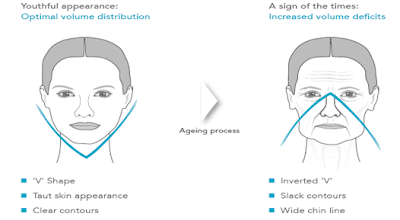 I must admit that I honestly thought that my mother had a naturally boxy shaped face. Its only when I was going through the Radiesse brochure and looked at their ‘ageing process’ image that I realized that the boxy shape was due to ageing and gravity and had nothing to do with her actual face shape. I realize that this makes me sound quite awful, but honestly, how closely do we actually look at our parents?

After being examined by Dr. Tam, his nurses cleansed and photographed my mother from a number of angles and applied some numbing cream on her face. Thirty minutes later, the procedure began. 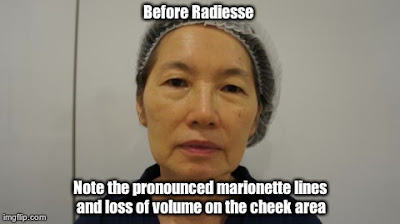 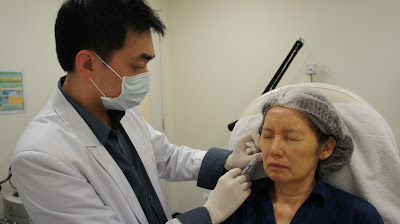 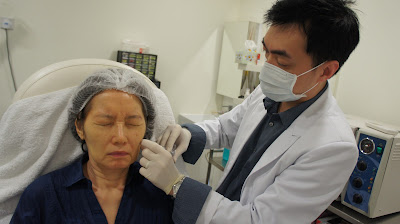 The procedure did not take too long, but the doctor was diligent in ensuring that he injected just the right amount to make her look natural. He answered all her questions and advised her to avoid sleeping on her face or side for the first few nights. 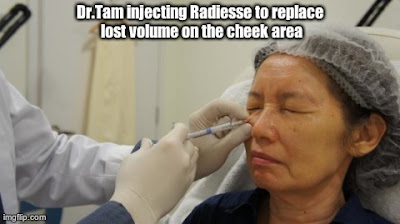 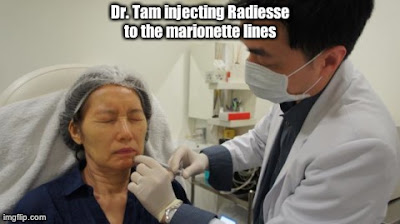 The end result? My mother, an injection-phobe was ecstatic with the results. The procedure she said was painless (thank you numbing cream and the expert hands of Dr. Tam) and she was really happy with the results, which although subtle, Dr. Tam ensured us would look even better after a few months when her collagen started to grow. 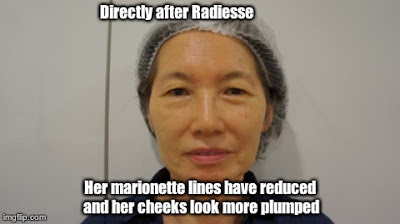 A few days after the treatment her skin looked much smoother (even my totally unobservant brothers commented that she looked rested and younger). It was as if someone took an iron to the wrinkles and lines. Her naso-labial folds were barely noticeable and her marionette lines greatly reduced. She looked literally like she had spent a week at a spa; rested, relaxed and fresher.

A month after her treatment, she has noticed that her jawline seems more defined and her marionette lines are even less visible. She says that the results are not overly obvious, but subtle enough to be noticed without anyone knowing that she had work done. Her pigmentation after just one treatment of IPL and q switch has lightened tremendously and she now takes oral sunscreen pills and applies (when I nag) her sunscreen almost daily. Getting her to reapply her sunscreen every two hours is still a work in progress, but hey, Rome wasn’t built in a day!
Posted by The LXGers at 10:26 No comments: