Well its no secret to some that I've been on the lookout for these beauties for a quite a while now - not just for their reputed ergonomic design, but simply because they look so outrageously wild! As far as footwear is concerned, there's nothing else that quite looks like a pair of Five Fingers! 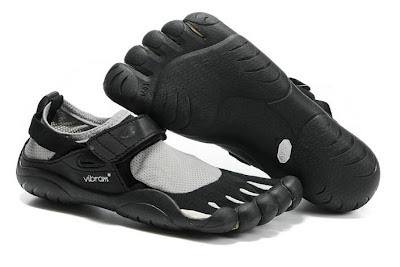 The Vibram Fivefingers was named one of the best inventions of 2007 by Time magazine, and I've been curious about them ever since. Just by the looks of them, it would be easy to dismiss them as a sales gimmick - trainers that are designed to look just like your actual feet. I mean that does look pretty cool...

But subsequent research and feedback from professional athletes actually attests to the effectiveness of Fivefingers in both training and everyday use. Voted “Most Popular” of all the models available, because of its versatility, the KSO features a thin, abrasion-resistant stretch polyamide and breathable mesh upper that wraps around the entire forefoot to literally “Keep Stuff Out”. A single hook-and-loop closure helps secure the fit. The non-marking 3.5mm Vibram® TC1 performance rubber outsole is 'razor-siped' for enhanced flexibility and a sure grip on wet or dry surfaces... Well that's what it says on the label, and I am blinded enough by the science of it to believe them...

So with all of these salient points in its favour, I finally went ahead and got me a pair of Fivefinger KSO's. And how cool are they!

Just admiring their shape and form - its great when designers get to go mad with their creations, and still see them come to life as they intended, without any compromises having had to be made for the sake of sensibility and conservativeness. 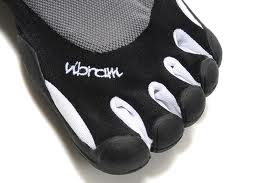 Yes, at first glimpse, you would hardly call a pair of FiveFingers a sensible pair of shoes - in fact they are not so much shoes as foot covers with a pocket for each toe.

So how do they feel? Well, the thin flexible soles allow you to feel absolutely everything under your feet. And this may be disconcerting to some - especially those that appreciate the spongy comfort of padded soles as they run in the park or trek over hillsides...

Indeed the Fivefingers are not cushioned,  so they make every run, walk or hike an engaging event. They are considered a training device because they force your body to adapt to a new style of  footwear. That, in turn, apparently stimulates the muscles in your feet and lower legs to build strength and improve range of motion.

But this is quite a radical adaptation from the norm, and in fact the accompanying guide also recommends for the first week or two of wear, that you just use the Fivefingers for about an hour or two a day. And this evening, after having proudly worn mine around town for at least four hours, I understood why...

I had muscles that I never even knew existed in my foot, cramping with aches and pains, and my calf felt like it had been repeatedly beaten with a hammer. But that's my own fault for overdoing it on the first day. A couple of hours later on, and my feet now have a pleasantly warm and buzzing sensation... So obviously its going to take a gradual getting used to...

That eventual adaptation is said to result in increased balance, greater mobility and improved core stability. Only time will tell...

I'll let you know after I take my KSO's out for a proper spin!

Radiohead never fail to amaze... With such a wide repertoire of sounds and instrumentation, they're a band that persistently keep their listeners on the edges of their seats, wondering what they'll come up with next... 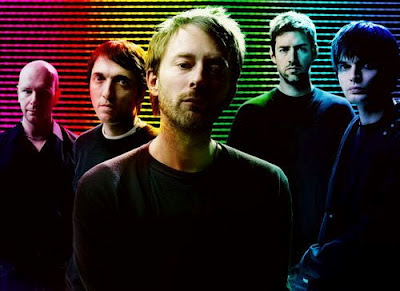 I have personally been wallowing in the blissful depths of their latest "King of Limbs", for the past year or so. It's a rare thing to say, but almost every track on the album works for me.

Every song has its strength, and the lyrics range in typical fashion from joyful incoherence, to angry politics, to poetic metaphors, and emotionally charged offerings of frustration, rage, love and depression.

And there's even a little humor thrown in...

Thom Yorke's vocals are at their best and the band play in perfect unison. You just have to check out their "From the Basement" performance on YouTube to see how much they love what they're doing right now. A band truly at the top of their game.

So it was with even greater surprise that I recently explored Radiohead's extensive back catalogue of work, and re-acquainted myself with some real gems. Even in their early days (Radiohead have been around for 27 years and recorded eight albums) the band were undertaking devious musical experimentation and writing wonderfully subversive, sarcastic lyrics. And after all that time, even their earliest work sounds fresh and new.

Just check out this jewel of a song from their 2001 album, Amnesiac. Cunningly disguised as a smoky, blues-laden closing-time lament, this call-to-arms, itching-for-a-fight song builds into a rock-anthem crescendo, in characteristic Radiohead irony. "You and Who's Army?" Love it.

Indeed, at the risk of quoting our current favourite celluloid robot, David from Prometheus - "Big things have small beginnings..."

This will definitely not be the last time we'll be talking about Radiohead at LXG!

It's amazing how something so small and seemingly insignificant can conjure up such happy memories...

Idling down the supermarket aisles today, I was thrilled to find a shelf full of Cadbury's Fudge! I never thought I'd see these little beauties again, well at least not on this side of the Globe... 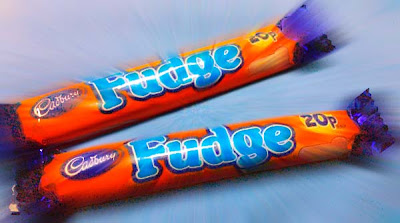 As a schoolkid back in the UK, every morning my mum would diligently pack a finger of Fudge in my lunchbox, next to the apple and the peanut butter sandwiches, and off I would go to school, a happy chap.

I think almost all my mates did the same thing, and we would all sit around swapping our lunch items with each other, but never parting with our precious Cadbury's Fudge.

And here, some thirty years later, and thousands of miles away, I find my old friend once again...

I also remember a rather fun little commercial that used to play quite frequently back in the day:


The sudden appearance of such rare sweet treats in supermarkets here in Singapore has probably got a lot to do with the fast-approaching London Olympics: all things red,white and blue now becoming most fashionable...

Still its amazing how this little choc has got me all misty-eyed for Old Blightey.

Congratulations! You have been chosen as the 3 top winners of the Kneipp Herbal Body Wash Trio Sets.

Congratulations! You have all won the runner-up prize of a Kneipp Herbal Body Wash each. 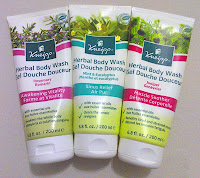 All you have to do is to message us your name, IC number and Mobile Number. We will then pass your details onto the Kneipp representative at the Paragon, so you can arrange a time and date to pick up your prize.

Congratulations again - and please let us know how the products worked for you!

Weekend window-shopping; LXG could not resist the sheer coolness and (obvious good taste) of this Tee: 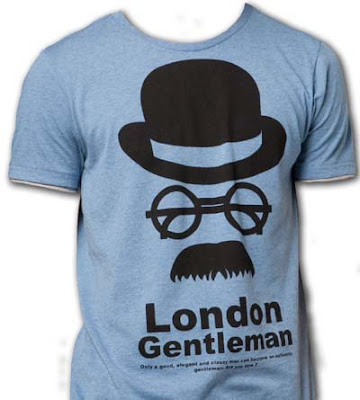 "Only a good, elegant and classy man can become an authentic gentleman. Are you one?

There are Italian Restaurants and there are Ristorante Italiano - and the latter tend to be more intimidating than the former, especially when confronted by a menu written entirely in Italian at the entrance to the establishment.

Adventures in Italian Cuisine for many of us don't stretch far beyond a few tried and tested spaghetti dishes and of course everyone's favourite: pizza. But that's not for want of trying; its just that most fledgling gourmets are too intimidated to even step foot in an establishment where the air is thick with the strains of violins and exclamations like "Era squisito!" and "Buon appetito!"

But fear not, in the recently opened Pietro, you'll find a welcoming, relaxed and unpretentious new hideaway in which to comfortably indulge your forays into the best of Italian cuisine.

Helmed and masterminded by local favourite and chef to the stars, Peter Neo, this 88-seater has been furnished and decorated to bring a slice of Italy close to home, and features Chef's pride and joy, a huge red traditional wood-burning oven, in which pizzas are cooked on a daily basis. 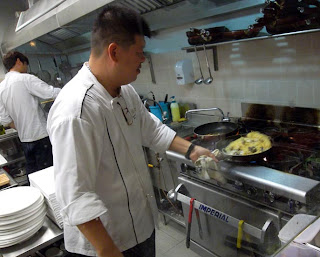 There's even a window into the kitchen itself, where Chef Peter works the flames to create his diverse and colourful menu.

But Peter's cheerful demeanor and sheer approachability means that there is nothing to be intimidated about here... Chef often walks the tables to greet his guests - so if you're not sure about something on the menu, just ask!

Peter cooks his pasta the Italian way, i.e. 'al dente' - still firm to the bite, and he is sparing with the salt. But he is well aware that local palates may still not be ready for this, so just let him know and he'll cook it a little longer and season a little more. However, Peter is also trying to give us a culinary education, so he hopes that local taste-buds will eventually make the adjustment... 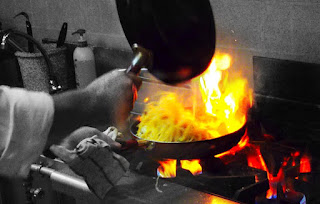 Coincidentally, when we were speaking to Peter, a customer hailing from Italy itself congratulated Chef on his 'perfectly cooked pasta'. Straight from the horse's mouth - as they say!

Chef Peter's take on Italian Cuisine is both respectfully classical, and also playfully fusion. You can go with the traditional, or join Peter on his culinary adventure, as he reinvents well know dishes using more exotic ingredients... This applied to both savoury and sweets...

Just a few of the highlights:

The Funghi Portobello ($20), each topped with crabmeat, ebiko and a succulent prawn - perfectly complimented (and not overpowered by) a rich Gorgonzola sauce.

Chef Peter's self-styled Pizza Pietro ($26), a light and crispy pizza base featuring Chef’s own homemade spicy pork sausage. (Could have easily pigged out on a plate of those divine sausages just by themselves!) 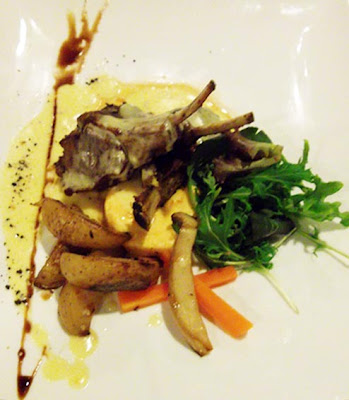 Desserts too, have also undergone the Pietro-treatment.

Too many to mention here, but another very interesting diversion from the 'norm' was Peter's Tortino alla Frutta ($14.80), a zesty, Passion Fruit-laden variation of the classical Chocolate Lava with Rum, Tortino di Lava con Rum ($15). Both indulgently sweet taste sensations!

The Poached Pear Ma Buoni with Orange Sauce ($15.50) was refreshing, tangy and light - a perfect way to end dinner...

And so, with Chef Peter Neo's warm and inviting personality, and a menu that promises (and indeed delivers), hearty, fuss-free and flavorsome food, there's really no excuse to not start exploring the world of Italian Cuisine...

And of course, never again be afraid to say, "Buon appetito!" 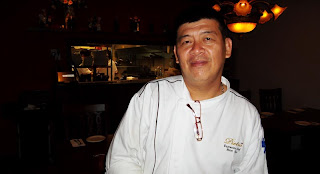