Nick's expertise delves deep into the annals of entertainment history and he kicks off his column with one of the grand-daddys of modern-day B-movie sci-fi flicks...
"They Live" is a film made in 1988 & was directed by John Carpenter who developed the screenplay by combining two short stories. 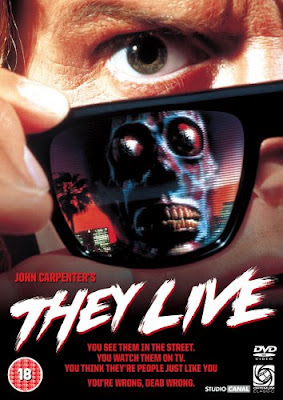 Often considered a cult classic, the plot revolves around a drifter who discovers that the wealthy elites who are major cogs in business & who run the country are not in fact humans, but aliens.

The alien elites & their cronies are capable of controlling human social affairs through subliminal messages & signals broadcast from a satellite dish mounted on the top of a television station.

The film is a very clever blend of both science fiction & horror. Those protesting with the current Occupy movement would relate well to the film's message which offers an explanation as to why the majority of the world's wealth is controlled by such a small percentage of its population.

In the film's case however the ruling class are aliens assisted by humans that have "sold out", to better their social & monetary standing, in exchange for assistance with controlling the general populace.

To this backdrop enters the character referred to as Nada (Rowdy Roddy Piper), who discovers sunglasses which reveal the alien lifeforms & also the subliminal messages used to control the populace.

There is however an underground movement which is manufacturing the sunglasses & jamming the subliminal television signal in an effort to awaken the populace to the alien control.

After discovering the conspiracy to control the population, Nada clashes with the authorities & assists the underground movement to destroy the signal being beamed from the satellite dish.

"They Live" contains some brilliant action scenes with gunplay aplenty & combines a deft sense of humor within the science fiction/ horror plot. Rowdy Roddy Piper delivers some classic one liners (including one judged as one of "The 100 Cheesiest Movie Quotes of All Time").

This film has it all - science fiction, horror, humour & action all tightly bound up with a social commentary where the rich & powerful are the bad guys & the poor masses are the heroes. Special effects are definitely B grade, but to me this adds a certain charm to the film which harks back to the drive-in horror/ sci-fi films of the 1950's.

Another highlight of the film is a well documented fight scene which lasts for 5 minutes with (ex-pro wrestler) Roddy Piper going toe to toe with Keith David (who appeared in Carpenter's "The Thing).

I must confess I am an absolute fan of John Carpenters films & I prefer "They Live" to his massive hit film "Halloween". This film certainly isn't Shakespeare, but that is not what Carpenter is about with his films. In my mind, Carpenter is the Ed Wood of my generation & is the master of the modern day "B-flick". If you are a fan of this genre I thoroughly recommend "They Live" as a must see.
****
Nick Talbot